Excavators come with a variety of attachments that are needed to perform specific tasks and each has a unique place within the scope of construction work. This article will revise some of the more critical attachments that excavator operators have at hand which are crucial to just about any construction project. Starting off, we will examine the bucket which is a standard feature of an excavator.

This attachment is so prominent that whenever we hear the word excavator the visualization that pops up in our mind is that of a bulldozer with a long arm with a bucket attached at the end of the arm. The bucket, however, is not exactly a standard item as there are various bucket types that come in the form of the general, medium, and heavy-duty bucket types.

The different tiers of the bucket types is dependent upon the type of digging that is involved. Apart from the type of digger buckets, there are also sieve buckets, screening buckets, mud buckets, and tilt buckets.

Excavator grab attachments are another common feature that is often seen on excavators. Often referred to as a grappler, the attachment is useful for picking up material at project sites that are heavy or bundled. The grappler type or category is often based on the weight of the excavator that they are best suited for. Excavator attachment hire prices are often very affordable and allow for multiple jobs often undertaken by many laborers to be done by just one excavator operator.

Most project managers select the right type of grappler based on the number of teeth that the attachment sports. These ‘tooth numbers’ vary from 4 all the way up to 7 and maybe even more. There is also the ‘thumbed version’ whereby the grappler sports another appendage that works like a ‘thumb’ making the ‘grabbing work’ much easier.

Moving on, we have the hydraulic rock breakers that come in three variations that is the light, medium, and heavy-duty rock breakers which basically depend on the type of rock or ground it is breaking. Then there are augers which are basically ‘huge drills’ and commonly also referred to as ‘posthole diggers’.

These attachments are critical to most projects as they are capable of drilling into hard soil and shale and even into solid rock. The drill heads are the main element it getting the right auger for the right drilling job, getting it wrong could cause damage to the drill head.

Also known as ‘quick hitches’ these components have become a dominant item at construction sites as they allow the excavator operators to switch from one attachment to another rapidly. This saves time and cost for the project while simultaneously enhancing safety for operators and crew as the latest couplers are automated and operators can make the change without exiting the excavator cab.

For instance, if an excavator operator is drilling a soft surface with an auger that was not designed to drill into harder surfaces, the operator could “drop the auger and exchange it to a ‘ripper attachment’ to soften the digging surface and then switch back to the auger without having to leave his cab, provided the excavator is fitted with the right type of coupler.

Types of Exterior Wall Finishes: Choose your own decorative material 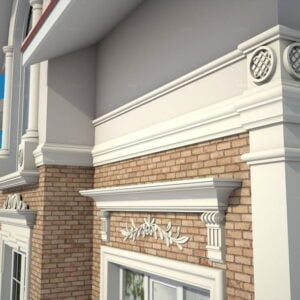 Unique House with a Secret: Architectural Mouldings and Types