The architectural bureau Rangr Studio has proposed an unusual solution for a fashionable minimalist mansion – protruding glazing on the facade of a modern house. The main social living area, located on the top floor, has a panoramic view that bulges slightly above the façade. It seems to pull space out of the boundaries of the house and draws it into the natural environment.

Priority on the species characteristics of the mansion

The cottage is located in natural surroundings near the city of Berkeley (California, USA). This is a picturesque area with forests, lakes, mountains. Therefore, I wanted to place special emphasis on the specific characteristics of the housing, which became the main purpose of using protruding panoramic glazing on the facade of the upper floor.

Due to the special design of the windows, the impression of being directly surrounded by beautiful nature is created. The forest, lake, fresh air are getting even closer, and the space itself is buried in all this, breaking out beyond the boundaries of stone walls. The effect is enhanced by the corner windows – you see that you go outside the building and seem to hang in the air.

Even a slight extension of the glazing beyond the boundaries of the main building envelope resulted in a noticeable increase in space. At least a few square meters have been added. And due to panoramic glazing, the room seems even more spacious and brighter.

Next to the panoramic living room on the roof, a terrace was made with access from this room. Adjoining the living space, this zone seems to become its continuation.

By opening the panoramic doors, you combine the roof deck with the living room, creating a single, ergonomic space for the whole family to relax. Opening structures allow you to regulate the microclimate in the house in a natural way.

Integration with the environment

It was the living room that was planned to be made as close to nature as possible, so that while resting here, the owners could not only admire the views, but feel the special forest atmosphere.

The protruding glazing on the facade of the house immerses those on the inside into the world outside the building. Spectacular panoramic views appear closer and you feel in direct contact with them.

Fashionable panoramic protruding glazing on the facade of a modern house has become an original design and architectural technique that affects not only the aesthetic appeal of the living space, but also functionality. Due to the location of the house on a high steep hill, the protruding structure creates the effect of immersion in the environment. 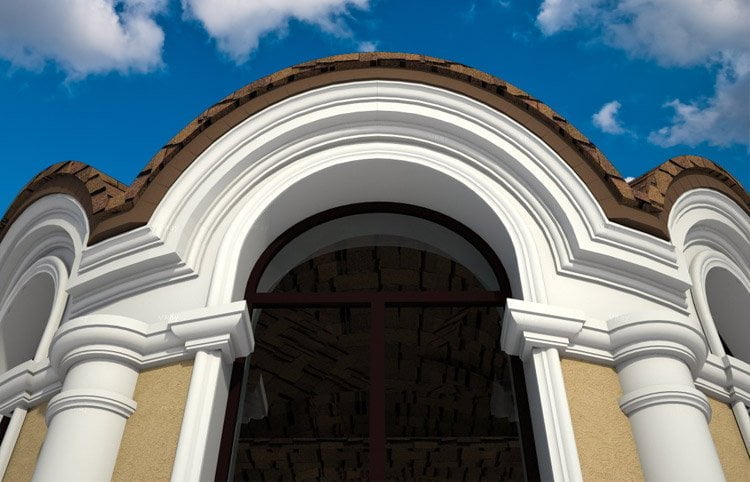