What role did the gray color house exterior in the cubic style play in the monolithic reinforced concrete mansion?

Spaceworkers has unveiled a state-of-the-art house with a gray, cubic facade. The features of the building are dominated by industrial motives, and all this is emphasized by straight, austere forms of monolithic reinforced concrete.

The building is cast as a single block of irregular shape and looks contrasting against the background of the natural environment. From the road it is constrained, strict and completely private, and from the backyard side it is distinguished by friendliness and maximum openness due to continuous panoramic structures, integration with the environment.

The monolithic reinforced concrete from which the building was built became the main instrument of its design. The task of the architects was to focus on the object, to distinguish it from the environment, observing the modern trends in architecture.

Experts adhered to monotony, simplicity, natural color, texture – the cottage turned out to be like a house made of natural stone. But at the same time, it is completely modern and has no common features with traditional housing of past centuries.

In the configuration of the gray facade of the house in a cubic style, spatial dynamics can be traced due to abrupt transitions of deep and protruding, high and low. Such architectural techniques and forms, contrary to the laws of physics, especially affected the showiness of the cottage.

The main feature of Cubism is the elementary nature of geometric forms in architecture and their spatial play. The monotonous gray color of the structures emphasizes their severity. At the same time, there are no decorative elements on the facade, and everything is planned with maximum rationality.

The solid gray facade covers the interior volume of the building, but at the same time does not look like a boring concrete wall due to the play of volumes. Drops, openings, blocks of different heights create an interesting architectural composition – as if looking at an object of contemporary art.

It was a good idea to use the gray facade of the house in a cubic style to achieve harmony of the object with the surroundings, while contrasting it against the background of the blue sky and green landscape due to the visual resemblance to stone. At the same time, the architects focused on the modernity of the mansion and emphasized its rationality.

How to best play out the gray color house exterior

Gray color in the exterior of the house has become one of the most popular due to the severity, showiness, neutrality of its achromatic appearance. Correct use of gray tones on the facade will help to add high cost, presentability and aristocracy to the building. The object receives a strict, solid appearance, symbolizing the high status of the owner.

A few simple techniques and rules for using gray on the facade will help to get around the gloom and dullness of the situation. It is important that the wrong tone can make the atmosphere at home boring and unfriendly.

Despite its gloom, the gray tone in the exterior of a country house can symbolize home coziness and comfort. To do this, it is enough to beat it with a large amount of white decor.

Highlighting entrance groups, cornices, windows using light colors dilutes the design of the facade. This will make the building welcoming and family friendly.

A large amount of light, glass, open structures, outdoor recreation areas, greenery are also welcome. The combination of green, white and gray in the exterior of the house is considered one of the most successful. Greens are usually used in landscape design, flower gardens. Nature effectively enlivens the design.

Accents with gray in the exterior of the house

It is also important to use gray tones on the facade to highlight certain zones, structures, roofs against the background of lighter elements of the building. With the help of contrast, it turns out to emphasize the singularity, originality of the architecture of the cottage.

Gray accents are widely used in trendy, modern styles and classics. In the latter case, the contrast should be less pronounced. A gentle transition from light to dark is encouraged.

In modern styles, on the contrary, they prefer sharp contrasts. A light concrete surface looks cool next to a darker stone wall.

Light gray in the exterior of the house

Light gray tones in home decoration look soft and sophisticated. In classical styles, they highlight the elegance of the architecture. White stucco molding even on the softest gray background will look distinct, stylish and beautiful.

Therefore, the gray color in the exterior of the house is almost a universal solution. With the right design, it will neutralize the emotional component, but at the same time add charm, high cost and aesthetics to the building.

Construction and equipping of a private house begins with the formation of the facade project. The exterior style can create a flawless visual effect or, conversely, overshadow the building. Increasingly, architects prefer restrained light tones and natural materials. For some, the gray facade of the house may seem boring, but not in the case of the Brazilian building from Beatriz Empinotti Arquitetura. The play of lines, shapes and contrasting colors contributed to the transformation of a monotonous texture into a true Brazilian atmosphere of passion.

For the construction of the house, huge volumes and shapes of the building were chosen. This option made it possible to compactly arrange bedrooms, a living room, a spacious dining room-kitchen, a bathroom, a lounge area, a home theater. In the courtyard, the outdoor area was converted into a partitioned veranda, which is filled with natural light.

To decorate the facade of the house in gray natural stone have been selected for the first floor and poured concrete for the second level. The concrete structure seems to protrude from the general building, thereby transforming the building with a modernist style. Part of the house overlooking the garden terrace is decorated with wood paneling. This material is in harmony with the general choice of natural cladding and natural texture.

An interesting solution was the entrance doors, which are completely disguised as a wooden canvas. It is impossible to distinguish them from the general background, and this is another feature of the exterior design.

You can transform and visually increase the space of a building using cold shades. Architects could choose a modern way of decorating the exterior, but he could not convey the subtle sense of taste of young homeowners. The uniquely executed gray facade of the house, the photo of which shows the beauty of the building, integrates into several shades.

Natural stone has a darker background with a relief surface, and the concrete protruding structure plays with light lines of the walls. The upper floor plastically forms several folds, which at different angles of lighting are interestingly intertwined with the texture of the coating.

Against the background of the gray walls, bright furniture became a fresh breath of glamor. With black and white stone and monochrome concrete, contrasting colors represent a mixture of Brazilian style and architecture restraint.

So that the facades of houses in gray colors do not look bulky, boring and primitive, you need to choose modern design areas – Scandinavian, country or modern. Contrast zones will create a warm and soft exterior.

The front of the house is completely made in the selected gray range. Entering the courtyard it seems that this is a completely different structure. Wooden panels and bright furniture distract attention from the grayness of the coatings. In order not to depart from the main idea of the exterior, architects used stone ceilings for the terrace and light gray plastering of the walls.

Garden of the territory went perfectly for arranging the terrace, where the furniture in black, red and blue colors. The residential building is closed from the outside, while residents can see the whole beauty of the area through panoramic glazing.

Maximum lighting allows you to dilute the gray facade of the house, filling the walls with different shades. When choosing concrete or stone, the requirement for saturated lighting is the main requirement.

The interior of the house, as well as the exterior, is balancedly decorated with gray-white stucco, black elements of decor, bright furniture. Designers not only withstood the main theme of the gray background, but also brought saturated colors to the room. 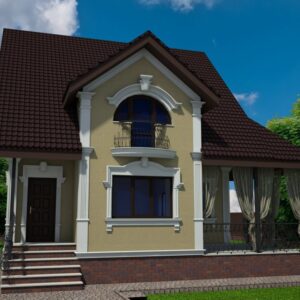 Tips and Ideas on What Color to Paint Your House Exterior 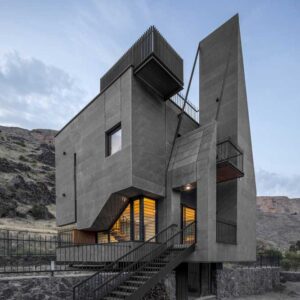 How to Adapt Modern Gray House with Nature?